Ben Forman at Brace For War 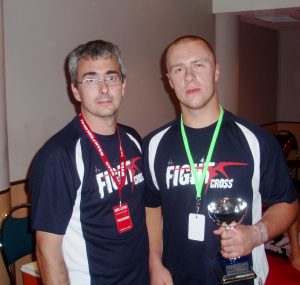 This was Ben’s 1st outing as a MMA fighter. He has been training with us for many years  in Auckland but had all ways been a stand up man. He fought Tas Knight form South Australia.

Ben started the fight with a few fast punches before Tas returned fire catching Ben with an right hook. Ben went to the ground and tried to take Tas down.

Tas was able to sprawl and ended in up in Ben’s half guard, Tas was able to break free and pass to take side control and then grabbed Ben’s left arm in a figure 4.

Ben tapped out, as he was carrying a injury to his left elbow.

Ben said he had never before had such a exciting experience.