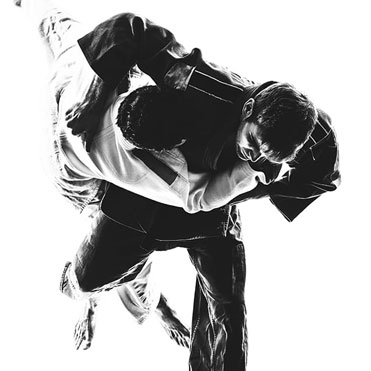 Brazilian jiu jitsu (BJJ) is a martial art and combat sport that focuses on grappling and ground fighting which promotes the concept that a person can successfully defend themselves against a larger, stronger opponent through the use of proper technique and leverage.

BJJ was developed from Judo in the early 20th century by the Gracie family in Brazil. Unlike modern sport Judo which emphasis standing throws and takedowns, BJJ focuses on ground fighting without striking, instead using limb locks, chokes and other submissions to subdue an opponent.

Described as “The Gentle Art”, BJJ classes emphasises active engagement with your opponent (training partner) through both drilling and sparring. This hands on, “live”, approach is possible due to lack of striking (injuries) and is part of the reason BJJ is cited as one of the best martial arts for self-defence.

Our classes focus on development of core techniques, positional control, usage of weight and the concepts behind skills such as guard passing. Our style of coaching differs in that we do not spend as much time repetitively drilling a single technique, but instead emphasis understanding the components of a technique to make it applicable in multiple situations. BJJ significantly develops your core, muscular endurance (especially upper body) and flexibility. Martial arts have long been a popular activity for children, and for good reason. In addition to providing a… The Importance of Strenght training for Martial arts Athletes

Strength training is an essential part of any martial arts athlete’s training regimen. Not only does it improve physical…