Shower. Breakfast. On the road.

He gets to work at 4:30 AM. A job as a fitter and turner is what occupies him for the next 10 hours.

4:30 PM. He trains for the next two hours, honing skills and techniques.

6:30 PM. He becomes the teacher, coaching students for the next hour and a half.

Between 8 PM and 8:30 PM he cleans the gym and packs up before heading home.

By 10:30 PM he is hopefully in bed and by 11 PM asleep. Sleeping until that alarm sounds in four and a half hours’ time when he’ll do it all over again.

The North Lakes Head Coach believes in leading by example and the life he lives is a testament to that.

“I would like to think the strong work ethic rubs off on those around me,” He says.

Brian is on a journey and so are his students; pushing each other to get better, as martial artists and as human beings.

He explains how cultivating a supportive, loyal environment at his Fightcross gym at North Lakes is paramount to him. “Culture is massive for me. It’s everything.”

“It’s like a having a family where everybody is dedicated to training,”

“A school can’t grow if people don’t hang around and so having a large number of regulars who have been with me from the start means a lot to me.”

When the weekend rolls around, Brian says he often finds himself socialising with those from the gym over friends he’s known for twenty years.

“We sweat, bleed and sometimes vomit together,”

“It’s a unique, special bond that is formed at the gym.”

Brian is focused on being an example for his students. Recently, he took part in a boxing fight that he won. But, as Brian isn’t a boxer, the real victory for him was embracing the uncomfortable and having his students witness that.

“Boxing isn’t my area but I challenged myself. I put myself outside my comfort zone. I didn’t miss a day of training for 10-12 weeks.”

“The guys I’m coaching see that and whilst it might not lead to them training harder it can lead to an attitudinal shift.”

Through tireless training and taking challenges like a fight head on, Brian has the experience that is important when it comes to coaching.

“When you’re cornering somebody they are putting their life in your hands. They eat, train, and go to the toilet when you say,”

“By having that experience trust is easier to achieve between fighter and coach. And that rapport is key,”

“You might not think you’re ready to fight, but when your coach says you are, you feel like you can take on the world.”

Brian says for a fighter to be their best they have to have the utmost confidence in their coach.

“Often all it means is the coach just being there.”

It’s no secret Brian has an incredible work ethic. But he expresses how his day to day activities would be much tougher without his partner, Natalie. 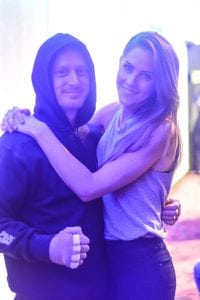 “I would struggle without her. She understands what I’m doing which is important seeing as large sacrifices are made from time to time. She’s always there even when things get intense.”

“She’ll shoot home early while I’m cleaning up the gym so that when I get home dinner is ready for me to eat. Little things like that make a difference.”

Taking on the Head Coach role at North Lakes has allowed Brian to develop in multiple areas.

“It’s forced me to become a better fighter, coach, gym owner and businessman.”

“I am exactly where I want to be.”

Brian Porter leaves no stone unturned as he strives to give those that train at Fightcross North Lakes the best possible experience. And, through those efforts, does the same for himself.