Huynh Steps Up For Nitro 2 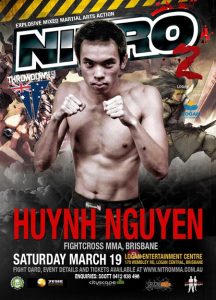 After coming out to the best entrance song, fight starts and Huynh gets first punches in, Todd delivers a couple of big kicks, they tie up, Todd muscles Huynh down but Huynh is able to reverse and lock on a tight rear naked choke. Will and I are screaming to get the hooks in as Todds face goes blue. Unfortunately Todd is able to scramble and end up on top. Ground n pound with Huynh covering up well but copping a few good punches.

Both trade and Huynh goes for a takedown but is stopped and cops a few punches and knees before they both end up in another scramble on the ground with Todd ending up on top. He rains down the heavy ground n pound with Huynh covering well and moving left and right but ref stops it. Gutsy, hardcore first pro fight for Huynh on very late notice (36 hrs) against a great striker