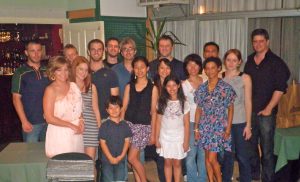 On Friday the 10th of December the Fightcross team enjoyed a wonderful end of year dinner at Carlyles at the Grange. A good time was had by all and the dinner was delicious.

As part of the fun, Secret Santa had been organised and everyone’s eyes lit up at the sound of presents. Every one ended up with some fantastic small gift – though there was quite a battle for the 2 potato guns. After the game everyone opened and enjoyed their gifts and the race between the slug, snake and dinosaur began.

We noted that the slug did not gas. Check out some of the photo’s below.

A big thank you to Jodie and the staff at Carlyles for such a wonderful meal and an awesome time. Another big thankyou to the Fightcross team for making such a great night.