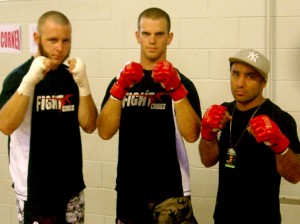 We had two fighters book to fight on this last weekends Fightworld cup, then at the weigh in the promoter  Kerry Dune had a fighter pull out at the last minute so Will Briggs who was there to support our guys put up his hand a took a fight with 24 hrs notice, now that takes guts.

The three Fightcross fighters did us proud, Will took on a guy that was bigger then he was by about 5 kgs and the first round was up and down, Will finally tapping out to a rear naked choke 13 seconds into the 2nd round. Well done Will!

Craig Lankester was next and took the cage ready for a war, and the pace was fast with both fighter standing and trading. After one exchange the ref stopped the fight and warned Craig’s opponent for kneeing a grounded fighter the knee court Craig and split him under the left eye, at the end of the 1st round the Doctor stopped the fight due to the cut. Craig was gutted, but what a fight full on action from start to finish. Great job Craig!

Josh Carey was our last fighter on the card, Well the walkout was great Josh opponent  was following him around the cage and Josh pointed at him saying “Bring it on”, The fight was again fast pace and Josh was landing strikes at will his opponent did not want to train and kept shooting Josh. Josh’s opponent got mount and Josh work hard from the bottom striking and working dismounts. The Fight was like this for the full three round fast pace loads of striking and take downs, one of the top fights of the night. Josh lost a majority decision on points! Awesome work Josh!

We are all looking forward to next years Fightworld cups