‘I could never have done this before I started MMA,’

‘I could never have talked about myself in a setting like this . . . no way,’

‘I could hardly have a conversation,’

He looks me square in the eye. I can’t help but do the same. There’s not much he says that lacks weight.

On Saturday, Matt Tana makes his B-Class MMA debut. On that night he will be engaged in a fight. But for today he is engaged in thought.

Born in the small town of Kerikeri, New Zealand, Matt had a humble upbringing and was raised on good manners and good morals.

‘I was taught to respect my elders and ask people, “How are you going?”’ Coincidentally, Matt asks out waiter when we arrive, “How are you?”

Not expecting this question, the waiter replies, “Sorry, what did you want to order?”

Matt reiterates, “I was asking how you were,”

“Oh, I’m good thanks”, comes the startled but appreciative response.

Matt isn’t necessarily a forthcoming person though. In fact, he is quite the opposite. A quiet natured individual, he has lived a self-conscious life.

‘For my whole life I’ve been insecure. I’ve had to wear a mask to protect myself,’

‘I used to walk into rooms and see everybody as a threat (on an emotional level),’

Pouring two sachets of sugar into his coffee, Matt surveys the tables around us.

‘But now, I feel like I’m safer than anybody else here,’

‘Before Fightcross, I was in the gutter’ (figuratively and literally I come to learn)

‘I was an alcoholic. I would wake up in the morning vomiting blood and the only way to stop it would be to have a glass or wine,’

Upon hitting rock bottom, Matt decided enough was enough and vowed to steer his life in a positive direction. Yet the vice of alcohol lingered and it wasn’t until he found an outlet that Matt was confident he wasn’t going back.

He tells me this as his ham and cheese croissant is served (a requirement of any Matt Tana Coffee Club outing).

Fightcross, and moreover MMA, changed Matt’s approach to life in a number of ways. One being his relationship with conflict. 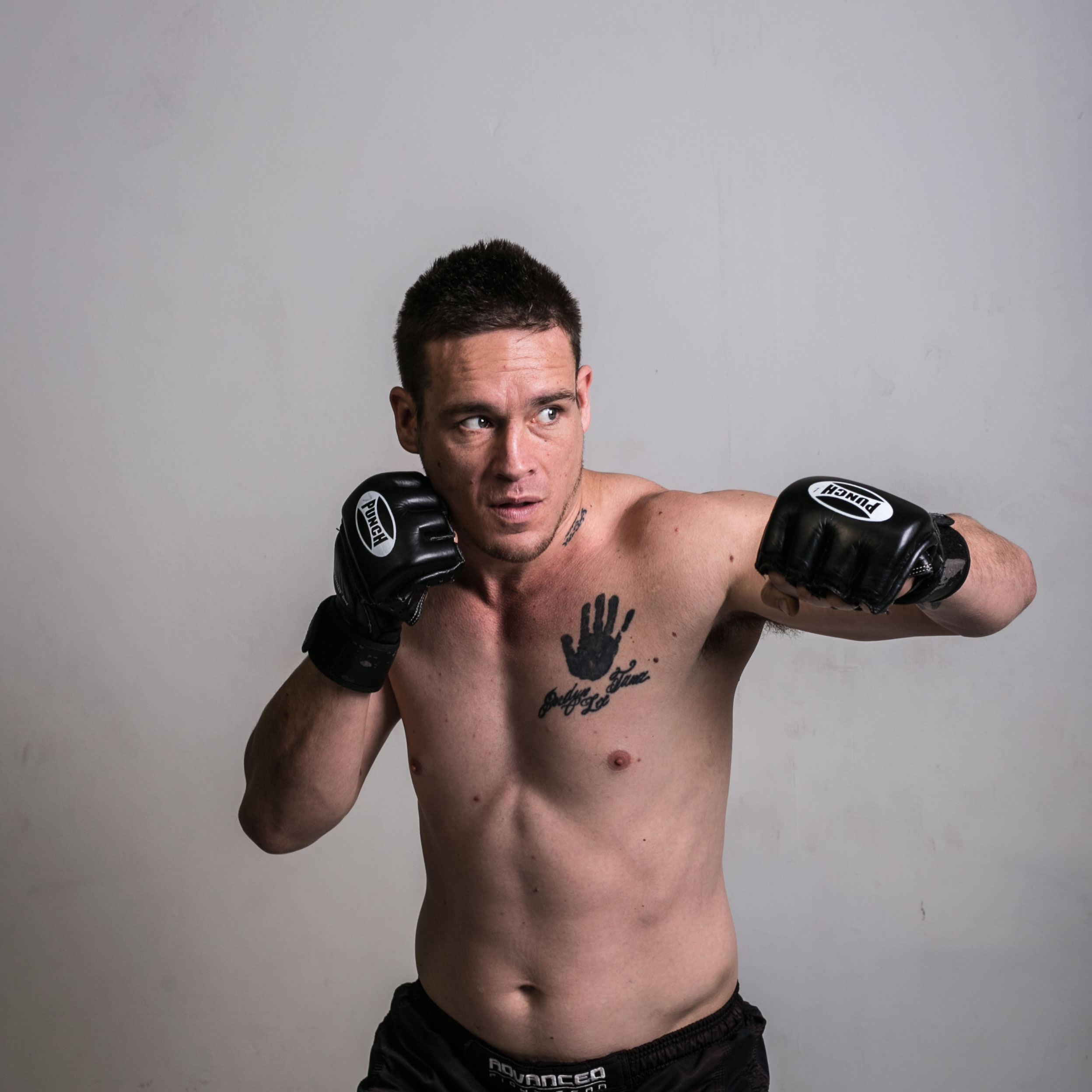 ‘I felt I had to resolve every situation. Every argument, every dispute, every altercation, I had to be a part of, I felt obligated to be part of the resolution,’

‘But as I started witnessing contests in the gym, whether they be on the mat or in the cage, I learnt to let go,’

‘I learnt there are many fights that are not my fight,’

Nowadays when there is an argument within the vicinity of Matt, but doesn’t involve him, as long as it doesn’t get out of control and people aren’t being hurt, his response is: let it go. As rain begins to fall outside, Matt begins to articulate what stepping into the cage means to him.

‘It’s one place I can’t hide. There is nowhere to go, there is nothing to say. It is no longer about my imperfections and insecurities.’

‘In that moment, I discover my true worth,’

According to Matt, MMA is a testing ground for limitations; a place to push his boundaries and realise his capacity. The ceiling rises in his next fight. He will partake in a B-Class bout which carries less restrictions than C-Class, the only level he has competed at previously. This excites Matt.

And whilst the unknown of a B-Class fight also inspires nerves, Matt says they will disappear when the cage door is closed.

‘I have to overcome the fear and just shut the door,’

Just shut the door. A metaphor for Matt’s life.

‘You know I’ve had to “shut the door” six times during this conversation?’

I glance around as Matt gives me an example of ‘shutting the door’.

‘There was a lady sitting at that table behind you before and she looked at me in a strange way. I began thinking, “Why did she look at me like that? What was she thinking of me?” My mind was racing and then I just “shut the door”,’

On Saturday, the door will be shut behind Matt and he will be free to express himself.

‘I know my opponent is ready for me. I am ready for him. It isn’t long before the door will shut behind us,’

‘The next fight is not about how much I can hurt someone. I’m fully accepting of the fact that I may lose, that my opponent may be better on the day,’

‘I understand that no matter the result, everyone will be proud of me. That pride is unconditional’

‘Fighting is not about blood, it is about wellbeing,’

This paradox concludes our conversation. A statement many would struggle to comprehend. Akin to the surprised response of the Coffee Club waitress when Matt takes up our plates and mugs to the kitchen.

As we walk out Matt worries that he hasn’t provided me with anything sufficient to write about.

Matt Tana will be fighting Aftershock 26: Girdham vs Moses this Saturday, September 17 at the YMCA Bowen Hills. He will be fighting alongside team mates, Maxwell Armstrong and Craig Lankester.